The burial of an Amazon in a precious metal hut dated to the second half of the 4th century BC e., discovered the staff of the Don expedition of the IA RAS during the study of the burial mound of Maiden V in the Ostrogozh district of the Voronezh region. This is the first fully preserved ceremonial headdress of a rich Scythian woman found in the Middle Don: earlier, archaeologists found only a few details from such hats in this region. The preliminary results of the study of the finds were announced on December 6 at the meeting of the Scientific Council of the Institute of Archeology of the Russian Academy of Sciences by the head of the Don expedition Valery Gulyaev.

“A little more than two dozen such hats were found, and all of them were found in the“ Tsar’s “, or in the very rich mounds of the steppe zone of Scythia. We first found such a piece of clothing in the barrows of the forest-steppe zone, and what is especially interesting is that the piece was first discovered in the Amazon’s burial, ”says Valery Gulyaev.

The burial mound of Maiden V, which was named after a nearby village, has been known to archaeologists since the 2000s. It consists of 19 embankments, some of which are practically invisible, since this area is a zone of agricultural land, which is actively plowed up. Since 2010, the monument has been explored by specialists of the Don expedition of the Institute of Archeology of the Russian Academy of Sciences. 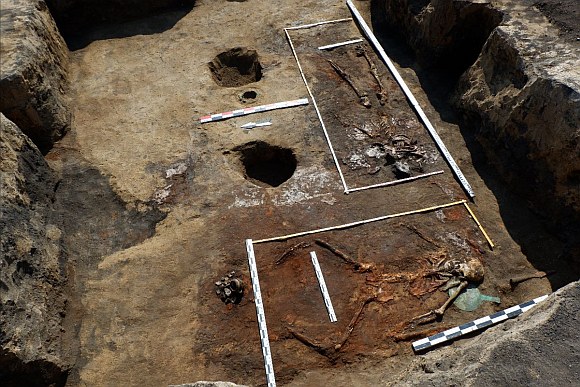 General view of the burial

At the time of excavation, Mound No. 9 of Maiden V was a small hill about 1 meter high and 40 meters in diameter. Under the center of the embankment, archaeologists discovered the remains of a tomb, into which a narrow dromos entrance led from the east. In ancient times, the tomb was covered with oak blocks, which were laid crosswise and rested on 11 powerful oak pillars. The grave pit was surrounded by a shaft of clay taken from the ground during the construction of the grave.

Four women of different ages were buried in the mound: two young women of 20-29 and 25-35 years old, a teenage girl of 12-13 years old and a woman of 45-50 years old. The burial was carried out simultaneously, since one of the pillars supporting the closure of the tomb was in the dromos and completely blocked the passage, and it would be impossible to go around it during subsequent burials.

The burial was robbed in antiquity: during the excavations a predatory passage opened, dug from the side from the northern part to the center of the mound. But only the northern and eastern part of the tomb turned out to be robbed, where were the remains of a teenager and one of the young women. 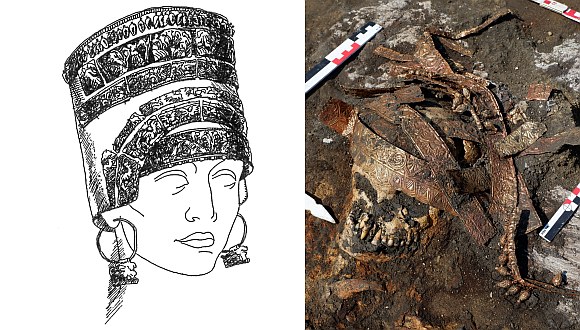 “At a time when Scythians lived in these places, there were beautiful oak forests. Oak is an excellent building material, and thanks to it, we can calculate when the robbery occurred. The robbers broke into the grave from the north, when the ceiling had already collapsed, and the crypt was buried, that is, 100 or even 200 years after the mound was poured: in less time the oak ceiling would not have collapsed. They scattered part of the bones, but, fortunately, they found only part of the burial, ”said Valery Gulyaev.

In addition to the scattered remains, more than 30 iron arrowheads, an iron hook in the form of a bird, horse harness elements, iron hooks for hanging the reins, iron knives, fragments of molded vessels, numerous animal bones were found in the northern half of the pit. In the filling of the predatory passage, a broken-off black-lacquered lekif with a red-figured palmette was found, dating from the second to third quarter of the 4th century BC. e.

Near the south and west walls were two pristine skeletons, laid on wooden beds covered with grassy bedding. One of them belonged to a young woman buried in a “horseman’s pose”: as anthropologists showed to lay her in this way, the tendons on her legs were cut. Under the left shoulder of the “horsewoman” was a bronze mirror, two spears lay on the left, and a bracelet made of glass beads was put on his left hand. At the feet were two vessels: a molded incense burner and black-lacquered one-handed kanfar, which was made in the second quarter of the 4th century BC.

The second buried woman was about 45-50 years old: for the Scythian time it was a respectable age, since the average life expectancy of a woman was 30-35 years. She was buried in a ceremonial female headdress — calaf, from which preserved plates decorated with floral ornaments, and rims with pendants in the form of amphorae.

Studies have shown that jewelry was made of an alloy in which about 65-70% is gold, and the rest is impurities of copper, silver and a very small percentage of iron. This is a rather high percentage of gold for Scythian jewelry, which was often made in the workshops of Panticapaeum from electrum — an alloy of gold and silver, and the percentage of gold could be about 30%. Further research will be required to determine whether native gold containing impurities was used for jewelry or whether the alloy was prepared as the raw material.

“Calaf found is a unique find. This is the first whole headdress on monuments of the Scythian time found on the Middle Don, and it is found in situ, on the spot, on the skull. Of course, such hats were previously found in the famous rich mounds of Scythia, but only a few were discovered by archaeologists: more often they were found first by peasants, then they were seized by policemen, landowners, and finds, when they reached the experts, passed through many hands, and therefore it is not known how much they are preserved. Here we can be sure that the find has been completely preserved, ”said Valery Gulyaev.

Next to the head of the older woman was laid an iron knife wrapped in cloth, and the iron arrowhead of a rather rare type: petiolate with a forked end. These findings, as well as numerous details of weapons and horse harness, suggest that “Amazons” were buried in the mound — women warriors whose institute existed in the Scythian era among Iranian-speaking nomadic and semi-nomadic tribes of Eastern Europe. Such riders probably guarded cattle, property, and homes when men went on long military campaigns.

“Amazons are a pan-Scythian phenomenon, and in the Middle Don alone over the past decade our expedition discovered about 11 burials of young armed women. Separate mounds were poured for them and all the funeral rites, which were usually performed for men, were performed. But for the first time we are faced with the burial of four Amazons at once, and of such different ages, ”said Valery Gulyaev.

The burial was made in the fall, at the end of the warm season. The studies conducted by paleozoologists of the Academy of Sciences of the Russian Academy of Sciences helped to calculate this: bones of a six-eight-month-old lamb that were once found in a bronze cauldron dug into the ground in the center of the grave were found in the grave pit. The robbers took away the cauldron, which was of considerable value, and threw the bones that turned green from a long stay in the bronze dishes. Since sheep usually bring lambs in March-April, it was concluded that the burial for which the mound was poured was made no later than November.

Findings in the burial pose scientists with questions that are not yet answered.

“We are faced with a riddle: we have two women in their prime, one teenager and one woman, quite elderly for the Scythian time. It is not clear how they could all perish in an instant? They have no evidence of bone injuries. Two women whose bones were scattered have signs of tuberculosis, brucellosis, but they do not die from these diseases at the same time. Therefore, we still cannot understand what the cause of death was, and why four women of different ages were buried at the same time at once? ”Gulyaev asks.

Contacts:
Press Service of the Institute of Archeology RAS:
press@iaran.ru